Five years ago, Erislandy Lara believed he should have been awarded the biggest victory of his career. He wasn’t. Despite giving Canelo Alvarez one of the toughest tests of his career and despite the fact Lara thought he had won the fight, the judges awarded a split decision to Alvarez. On Saturday, though, Lara will get some measure of redemption. That’s because he’s facing Canelo’s brother, Ramon Alvarez, in a fight that will be live streamed on Fox.

Yes, Lara probably won’t ever get another chance to beat Canelo Alvarez, one of the best fighters in the world. So, he’ll have to settle for his older (and less talented) brother.

“The fight with Canelo was a long time ago,” Lara said, via Yahoo Sports, “so now I’m just looking forward and toward being in bigger fights.”

Lara has already been in plenty of them. But now the 36-year-old 154-pound junior middleweight gets a national TV outlet to try to impress and begin what could be the final stretch of a standout pro career.

Here’s everything you need to know to watch the Lara vs. Alvarez fight. Even if you’ve said goodbye to cable services and you exclusively stream the content you watch, you can still take in Lara vs. Alvarez. Every major live streaming service offers the Fox channel, and each one allows at least a one-week free trial. That includes YouTube TV and DirecTV Now.

Some of the best options to stream Fox are listed below, but you can also watch the event on the Fox Sports app, available in English and Spanish, on either the Fox, FS1, or Fox Deportes feeds. You can also watch on your desktop computer on FoxSports.com.

If you want to watch Lara vs. Alvarez online via Sling TV, you’ll need to be subscribed to either Sling Blue ($25 per month) or Sling Orange Blue ($40 per month). Both of those packages include Fox and FS1 (and it’s still a nice perk that Sling subscribers can order a la carte packages). Sling TV also offers a special Latino package for bilingual viewers. Sling TV is also currently offering a deal where you can subscribe for 40% off the regular price for the first month of your subscription. That means Sling Blue would cost $15, and Sling Orange Blue would cost $25. (Here’s a complete guide to Sling TV channels and our Sling TV review.)

Hulu is a great way to live stream TV (it has nearly 60 channels, including Fox and all the major broadcasting networks) or to watch its massive on-demand library of movies, TV shows, and original series. Hulu allows you to do both. Thanks to that versatility, Hulu with Live TV is a great option. It’s also the best way to bundle your streaming services into one place. (Here’s the complete list of Hulu Live TV channels.)

If you’re a big-time sports fan, FuboTV is probably your best streaming service option. If you love international so

Billy Joe Saunders will make his return to the ring on the KSI vs Logan Paul 2 undercard on November 9 to defend his world super middleweight title.

Eddie Hearn will promote the card, with sources telling The Independent that the Matchroom promoter is now on board to put together an undercard after the YouTube stars decided to turn professional.

The Brit will defend his WBO belt at the Staples Center in Los Angeles, home of the Los Angeles Lakers, having won the title in May against Shefat Isufi on points.

We’ll tell you what’s true. You can form your own view.

Saunders then decided to amicably split with long-time promoter Frank Warren, having struggled to earn fights against the biggest names in his division.

The 30-year-old appears set to earn those fights now after teaming up with Hearn, who also has WBA champion Callum Smith in his stable of fighters, as well as WBO world middleweight champion Demetrius Andrade.

In case you hadn’t heard, The Battle of Bendigo is happening on Saturday night.

The tagline for Jeff Horn’s fight with Michael Zerafa isn’t quite as exotic sounding as The Rumble in the Jungle or The Thrilla in Manila, but you have to admit it does have a certain ring to it. (Perhaps having defeated Manny Pacquiao in The Battle of Brisbane, Horn is working his way through Australian place names beginning with B — we can only hope The Battle of Bong Bong is next.)

But if you don’t follow boxing closely, you could be forgiven for wondering who Michael Zerafa is, why he’s fighting Jeff Horn and why you should care. Well, read on and wonder no more.

Who is Michael Zerafa?

Zerafa is a 27-year-old Melbournite who’s been boxing professionally for eight years. The positive take on his career would be that he is undefeated in Australia, has won 26 fights and a Commonwealth title.

The negative take would be that he has travelled overseas to fight better competition on three occasions and lost badly each time.

He’s also spent his career fighting at junior middleweight, the weight class down from the middleweight (72.5 kilograms) limit for Saturday’s bout. This probably matters less than it might in other circumstances: Horn himself has only fought once at middleweight, and Zerafa is five centimetres taller than him.

As a boxer, Zerafa’s greatest asset might be his toughness. Against the somewhat faded British star Kell Brook last year, he soaked up such an unbelievable amount of punishment that Brook seemed to tire of hitting him, which allowed the Aussie to have moments of his own. His straight punches are his best shots, and he often scores at range with jabs, one-twos and lead rights.

But in the unforgiving and often politically incorrect world of boxing social media, Zerafa is probably best known for photos that emerged before his 2015 knockout loss to Peter Quill 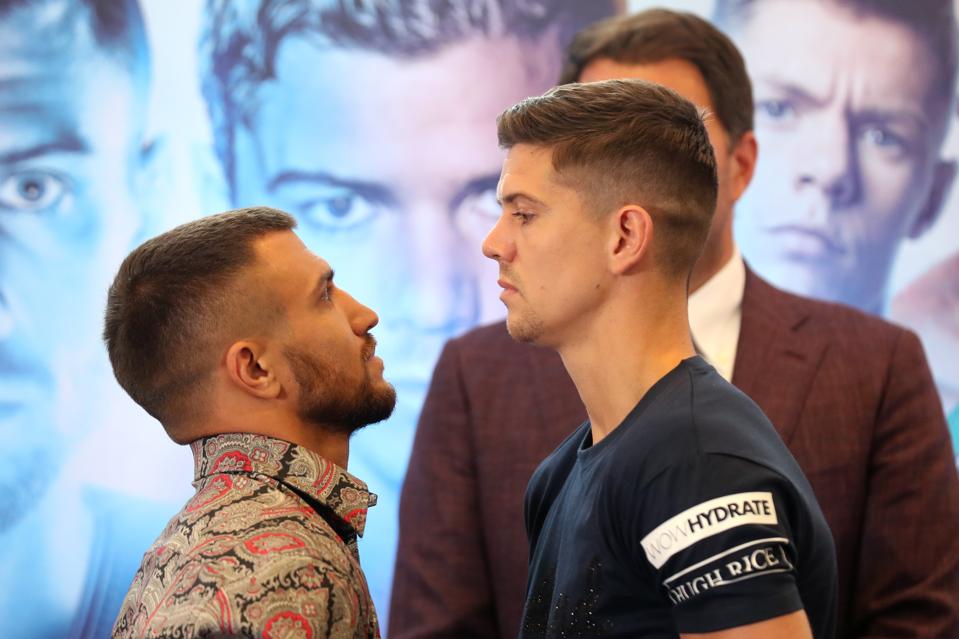 If you’re waiting for Vasiliy Lomachenko, the world’s best boxer, to be challenged in a meaningful way, it’s unlikely Luke Campbell will be the one to do it Saturday on ESPN . That, of course, goes against what the people around Campbell are saying. Some of them think he can upset Lomachenko, and the betting odds have tightened slightly in the past month or so.

Campbell is no slouch, and facing any other lightweight in the world, he’d have a good chance to win (and probably would be the betting favorite). But Lomachenko is a different kind of fighter.

“Loma is simply one of the finest boxers to ever lace them up, the best fighter on the planet today …” Campbell’s promoter, Eddie Hearn, said when the fight was announced.

You certainly shouldn’t skip out on watching this fight. On the contrary, Lomachenko (13-1, 10 KOs) is always entertaining, and Campbell (20-2, 16 KOs) will be in front of his British countrymen. The atmosphere at the O2 Arena in London should be electric, and Campbell could put up a good battle for at least the first few rounds.

There are plenty of reasons to watch Lomachenko vs. Campbell. Here are three of them.

1) Lomachenko wants to unify the 135-pound division: He’s already got two of the lightweight belts, and a third one is at stake on Saturday. So, if Lomachenko (or Campbell) wins, he’ll walk away with three straps, only needing the one currently held by Richard Commey (who could face star prospect Teofimo Lopez in his next fight later this year). Lomachenko wants all four belts before he decides whether to move up or down in weight. As for Commey, he’s predicting Lomachenko to win on Saturday but just barely. “I don’t believe he’s the best fighter in boxing by a long way,” Commey said, via Boxing Scene. “He has a tremendous amateur background, but this is professional boxing. They are two different sports. Personally, I think Canelo [Alvarez], [Terence] Crawford, [Errol] Spence and [Deontay] Wilder are above [Lomachenko].” OK, some would agree that Crawford is No. 1 on the pound-for-pound list while Lomachenko is No. 2. Maybe, you could put Alvarez or Spence ahead of him too (though I’d vehemently disagree with that). But let’s face it, the inclusion of Wilder on Commey’s list is ludicrous.

2) Some truly believe Campbell can win this fight: Here’s the gameplan Campbell could use to spur what would be one of the biggest boxing upsets of the year. George Groves, a former super middleweight titlist, also had some good advice for Campbell and discussed why Campbell is better than Lomachenko’s last opponent, Anthony Crolla (for the record, Lomachenko, who knocked Crolla out in the fourth round, agrees with Groves). “If you’re in awe of Lomachenko, he will have his way with you,” Groves said, via the Mirror. “With all due respect to Anthony Crolla, let’s not get popularity confused with ability. Luke would have done the same thing to Crolla. Luke and Crolla are a different pedigree, a different ability. We haven’t seen the best of Luke yet. He got on the floor in the first round against Jorge Linares and lost a split decision in the States—at the time, Linares was [one of the pound-for-pound best]. People see the L and just say, ‘He got beat.’” Crolla barely lost to Linares. For the record, Linares knocked down Lomachenko last year before Lomachenko ended up stopping him.

Jadeveon Clowney is in Seattle and will sign his franchise tender, which will enable the Texans to trade him to the Seahawks, a source told ESPN’s Adam Schefter.
Read More

Ten people were injured at the game. At least six were shot. Police have made one arrest.
Read More

Labor Day is on Monday, September 2nd. It’s also a great opportunity to save on tech products, so we’ve pulled together the best deals we could find happening this weekend.
Read More

The combination of the storm’s unusual behavior and a proliferation of weather amateurs has added to the challenges facing meteorologists.
Read More

The Buffalo Bills are saying goodbye to Shady.
Read More